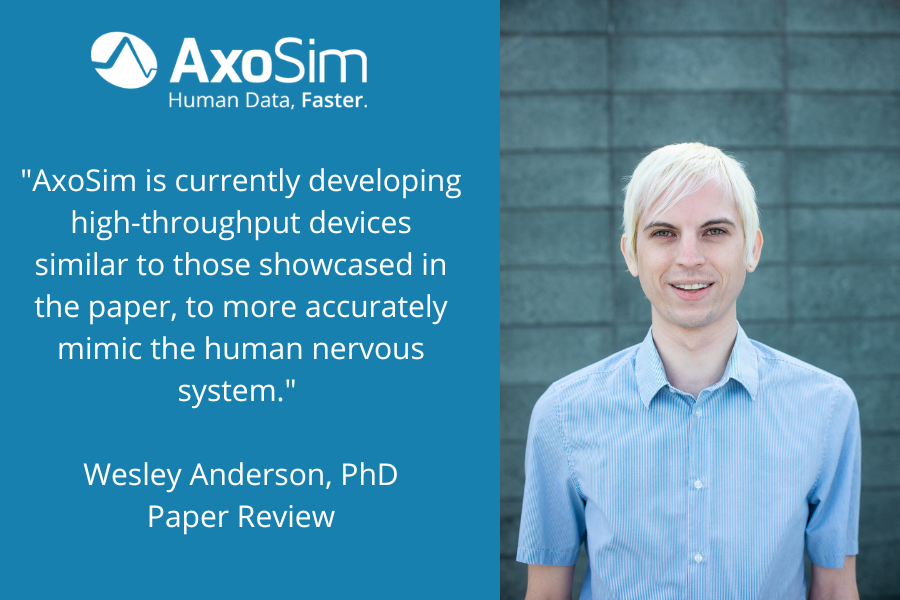 In vitro neuronal models provide scientists with simple and quick methods to study the nervous system. Often these models are comprised of one or two types of cells, which does not accurately represent the complexity of the nervous system. In addition, most neuronal models used today consist of cells cultured in 2D on a flat surface. Our bodies are not 2D objects and unsurprisingly, there is data to support that cell grown in 3D create structures and have cellular responses that are more appropriate to what is observed in vivo.

A research group from the University of Tübingen, Germany has developed an in vitro 3D neuronal culture for high-throughput drug screening applications. The model is a multi-well glass plate containing a microelectrode array, which allows for a non-invasive method to get electrical recordings from these engineered 3D neural tissues. The group used this device to grow neurons – from the mouse and also human IPSC-derived neurons – which both were able to grow as a three-dimensional culture with this device.

It is well known that it is difficult to record electrical signals from neuronal axons using MEA devices. In order to surpass this hurdle, the group has created this device with the addition of insulating caps on microelectrodes called capped microelectrodes (CMEs). The CMEs allow axons, but not neuronal cell bodies to grow through tunnels in the cap and onto these electrodes. They have shown that by using these caps, they are able to successfully record electrical responses from neuronal axons in their 3D neural culture device. They were able to record the responses from the CMEs and also through calcium imaging. The group validated these responses by using compounds that have well known effects on the nervous system, picrotoxin (PTX) and tetrodotoxin (TTX), the addition of each causing the expected effects of increasing or decreasing neuronal firing, respectively.

“Here is a promising in vitro platform for disease modelling and personalized medicine, with multimodal readouts for pharmacological responses of engineered 3D cultures,” said Molina-Martinez and Jentsch, the paper’s two first authors. This device’s use of CMEs in combination with 3D neuronal culture displays promising technologies that will push the field of neuroscience forward.

AxoSim is currently developing high-throughput devices similar to those showcased in the paper, to more accurately mimic the human nervous system. Our embedded electrode arrays are customized to integrate with the NerveSim® platform, which will improve reproducibility and enable numerous studies to be run in parallel. These new technologies are essential in finding the next treatments for the many debilitating neurological diseases that exist and will allow patients access to better treatment and care.